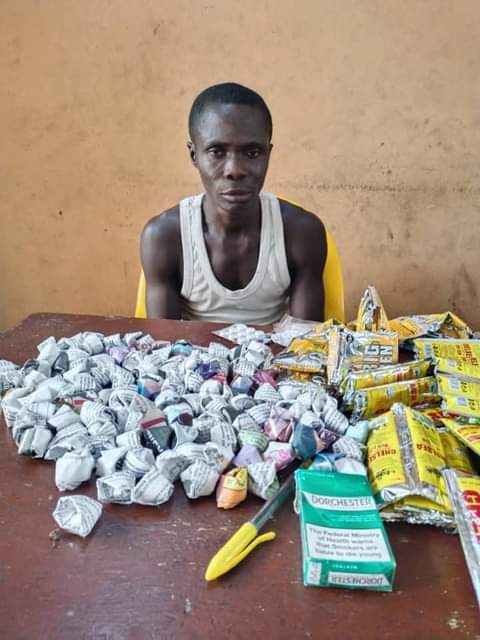 One of the suspects

ARREST OF ARMED ROBBERY SUSPECT/RECOVERY
OF ARM AND AMMUNITION

1.As part of the proactive policing measures put in place in the command, Delta state command under the watch of CP Ari Muhammed Ali, FCIA, psc+ has continued to intensify Aberdeen system of patrol, and intensive stop and search in the state, to prevent crime and also to nip crime in the bud. On  the 6/7/2021 at about 1200hrs, along Ijomi Otefe road, while operatives from Oghara police station were on stop and search duty, they intercepted a Lexus 350 ES Saloon car with Reg. No. Abuja YAB 865 BP driven by one Dennis Oghenevwede ‘m’ 29yrs of Jesse but living at Oghara junction. On searching the vehicle, the police discovered a  hand bag containing two (2) cut to size barrel pistols with seven cartridges. Investigation later revealed that the said suspect is a notorious cultist who has been on the wanted list of Police. Investigation is ongoing.

2.On the 5/7/2021 at about 2230hrs,  a distress call was received that   armed robbers were terrorizing residents of Agbarha-Otor dispossessing them of their belongings. On receipt of this information, the DPO Ughelli Division detailed  detective to the scene, the armed robbers were successfully naturalized by the police men, and  one of the suspect’s Obakpororo Julius ‘m’ of No. 68 Agbarha-Otor 43yrs was arrested.  Exhibits recovered from him includes one (1) locally made pistol, six  (6) live cartridges, one (1) expanded cartridge and some wraps of substances suspected to be Indian hemp and four (4) difference phones. Investigation is ongoing.

3.On the 6/7/2021 at about 1710hrs, while operatives of operation Delta Hawk patrol team were on confidence building patrol at Ishekpe quarters Ogwahi-uku, they intercepted and arrested one Sunday Umadia ‘m’ 41yrs of Ogbobo quarters Ogwashi-Uku. Upon search,   one hundred and seventy-four (174) wraps of dried weed suspected to Indian hemp, eight hundred (800) sachet of suspected SK, ten (10) razler  (roll bond), one  (1) lighter and cash sum of three hundred and seventeen thousand eight hundred and ninety naira (N317,890) were recovered from him. Preliminary investigation later revealed that suspect is a major dealer in illicit drugs. Investigation is ongoing.
Similarly, On 5/7/2021 at about 1300hrs, after series of intelligence gathering, ‘A’ Division Warri Rapid Respond team raided a black spot at Ogedegbe street Warri where one Austin Ojunom ,m, 29yrs was arrested with one hundred and twenty nine (129) wraps of weed suspected to be Indian hemp, suspect confessed to the crime. Investigation is ongoing.